Adelaide Airport (IATA: ADL, ICAO: YPAD) is the principal airport of Adelaide, South Australia and the fifth busiest airport in Australia. The airport is not large and easy to navigate having one terminal with three levels. Adelaide Airport Terminal 1 houses domestic, international and regional flights under one roof. See Terminal Map

Flights in and out of Adelaide have been diverted and delayed as fog — believed to be among the heaviest in the city in five years — blankets the metropolitan area.
International travellers returning home will soon be charged for hotel quarantine in SA, after the State Government deemed they had been given "plenty of time" to get back by now.
A BMW with a striking number plate has set tongues wagging at Adelaide Airport, with one staffer saying the car has been parked there since before Australia's coronavirus lockdowns began.
More than two dozen frontline medical staff from South Australia are preparing to join counterparts in Victoria in the battle to contain Melbourne's coronavirus outbreaks.
SA has ruled out opening the border with Victoria, but a new pre-approval process for those wishing to enter the state will still be put into action. Here's what you need to know.
Three new cases of coronavirus are recorded in South Australia, but all three are in quarantined travellers who have returned to Australia from India.

Adelaide Airport (IATA: ADL, ICAO: YPAD), also known as Adelaide International Airport, is the principal airport of Adelaide, South Australia and the fifth-busiest airport in Australia, servicing 8.5 million passengers in the financial year ending 30 June 2019. Located adjacent to West Beach, it is approximately 6 km (3.7 mi) west of the city centre. It has been operated privately by Adelaide Airport Limited under a long-term lease from the Commonwealth Government since 29 May 1998.:p 25

First established in 1955, a new dual international/domestic terminal was opened in 2005 which has received numerous awards, including being named the world's second-best international airport (5–15 million passengers) in 2006. Also, it has been named Australia's best capital city airport in 2006, 2009 and 2011. 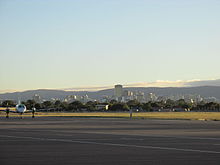 View of Adelaide CBD from the Adelaide Airport.

An early "Adelaide airport" was an aerodrome constructed in 1921 on 24 ha (59 acres) of land in Albert Park, now Hendon, which took over from the Northfield Aerodrome. The small facility allowed for a mail service between Adelaide and Sydney. To meet the substantial growth in aviation, Parafield Airport was developed in 1927. The demand on aviation outgrew Parafield and the current site of Adelaide Airport was selected at West Torrens (known as West Beach until 1991) in January 1946. An alternative site at Port Adelaide, including a seaplane facility, was considered inferior and too far from the C.B.D. Construction began and flights commenced in 1954. Parafield Airport was turned into a private and military aviation facility.

Passengers boarding from the tarmac in December 1967; this continued for domestic passengers until 2006.

An annexe to one of the large hangars at the airport served as a passenger terminal until the Commonwealth Government provided funds for the construction of a temporary building.

In 2005 a dual-use $260 million facility replaced both the original 'temporary' domestic and international terminals. The old domestic terminal was closed shortly after the new terminal was opened to flights and was demolished not long after. A new control tower was built west of the current terminal with the old control tower maintained for additional operations.

In October 2006, the new terminal was named the Capital City Airport of the Year at the Australian Aviation Industry Awards in Cairns. In March 2007, Adelaide Airport was rated the world's second-best airport in the 5–15 million passengers category at the Airports Council International (ACI) 2006 awards in Dubai.

Plans were announced for an expansion of the terminal in July 2007, including more aerobridges and demolition of the old International Terminal.

In 2011 the airport encountered major problems during the eruption of Puyehue volcano in Chile. The ash cloud caused flights to be cancelled nationwide, with over 40,000 passengers stranded in Adelaide.

International services became regular from 1982 upon the construction of an international terminal.

The original international terminal had only one gate with limited space for passengers. Check-in desks were small and waiting space was limited. It was partially demolished[when?] to make the area more secure and allow aircraft to park on the other side of the terminal.

On 18 December 2018, Singapore Airlines upgraded their Singapore to Adelaide flight from the Airbus A330-300 to the new Airbus A350-900 fitted with their dual-class regional configuration.

Fiji Airways also upgraded their new Boeing 737-8 MAX aircraft on the Nadi to Adelaide route, but due to the grounding of the 737 MAX aircraft, switched to the Boeing 737-800. However, Fiji Airlines announced that they would no longer fly to Adelaide as of 20 July 2019.

In late 2018 and Early 2019, China Southern, Cathay Pacific and Malaysian Airlines increased their services to Adelaide Airport to accommodate the increase of demand.

The airport is also a heavy cargo destination for Volga-Dnepr Airlines, who require 2.5 km of runway for the Antonov cargo plane. 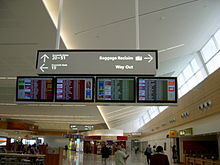 The airport was redeveloped at a cost of $260 million and opened 8 October 2005. The redevelopment was managed by builders Hansen Yuncken. Before the redevelopment, the old airport terminal was criticised for its limited capacity and lack of aerobridges.

Proposals were developed for an upgraded terminal of world standard. The final proposal, released in 1997, called for a large, unified terminal in which both domestic and international flights would use the same terminal. A combination of factors, the most notable of which was the collapse of Ansett Australia, then a duopoly domestic carrier with Qantas, and the resultant loss of funds for its share of the construction cost, saw the new terminal plans shelved until an agreement was reached in 2002.

The new terminal was opened on 7 October 2005 by the Prime Minister John Howard and South Australian Premier Mike Rann. However, Adelaide Airport Limited announced soon afterwards that only international flights would use the new facility immediately due to problems with the fuel pumps and underground pipes. These problems related initially to the anti-rusting agent applied to the insides of the fuel pumps, then to construction debris in the pipes. Although international and regional (from December 2005) aircraft were refuelled via tankers, a lack of space and safety concerns prevented this action for domestic jet aircraft, which instead continued operations at the old terminal. The re-fueling system was cleared of all debris and the new terminal was used for all flights from 17 February 2006. The new airport terminal is approximately 850 m (2,790 ft) end to end and is capable of handling 27 aircraft, including an Airbus A380, simultaneously and processing 3,000 passengers per hour. It includes high-amenity public and airline lounges, 14 glass-sided aerobridges, 42 common user check-in desks and 34 shop fronts. Free wireless Internet is also provided throughout the terminal by Internode Systems, a first for an Australian airport.

In 1919, the Australian government offered £10,000 for the first All-Australian crew to fly an aeroplane from England to Australia. Keith Macpherson Smith, Ross Macpherson Smith and mechanics Jim Bennett and Wally Shiers completed the journey from Hounslow Heath Aerodrome to Darwin via Singapore and Batavia on 10 December 1919. Their Vickers Vimy aircraft G-EAOU (affectionately known as "God 'Elp All Of Us") is now preserved in a purpose-built climate-controlled museum inside the grounds of the airport at 34°56′29.2″S 138°31′59.5″E﻿ / ﻿34.941444°S 138.533194°E﻿ / -34.941444; 138.533194﻿ (Vickers Vimy Museum). Due to relocation of the terminal buildings, the museum is now situated inside the long-term car park. In 2019, the state and federal government committed $2 million each towards a new preservation facility inside the airport's $165 million terminal expansion.

In July 2013, Adelaide Airport became the first Australian airport and second airport worldwide to have Google Street View technology, allowing passengers to explore the arrival and departure sections of the airport before travel.

In January 2015, the Adelaide Airport Master Plan 2014 was approved by the Commonwealth Minister for Infrastructure and Regional Development.

In September 2016, a relocation and major upgrade was completed for the base of the central service region of the Royal Flying Doctor Service of Australia. The base houses many Pilatus PC-12 and one Pilatus PC-24, maintenance hangars and ambulance bays.

In late 2018 and early 2019, Adelaide Airport commenced a $165 million terminal expansion project, increasing the length of the terminal, adding more duty-free and shopping outlets, and increasing international capacity. The upgrades are set to be completed by 2021. The old international terminal was also demolished in 2019, after lying empty for many years.

A world-first project that lowers runway temperatures by growing commercial crops irrigated by recycled water was trialled at Adelaide Airport, with the first trial completed in 2019. By planting 4 hectares (9.9 acres) of various crops and testing the effects of each on runway temperature, the scientists found that tree lucerne was most successful, leading to a reduction of an average 3°C in average ambient air temperatures on warm days, in and around the irrigation areas. Not only was the lucerne the best performer compared with tall fescue, couch grass and kikuyu, but it can also be cut into hay and sold as stock feed. The Airport is creating a business case to extend the project to cover 200 hectares (490 acres) of airport land.

In 2010, a man drove his car into a glass wall and then went onto the apron. He was arrested by police and taken away for assessment.

Route J1X (currently cancelled due to covid-19) operates an express service to and from the airport to the Adelaide CBD. Routes J1 and J2 operate between the northern, western and southern suburbs, via the CBD and airport - popular areas such as Tea Tree Plaza, Glenelg and Harbour Town are serviced. Routes J7 and J8 operate to West Lakes and Marion.

Taxis and rental cars are also available near the terminal building.

There were plans to build a rail line to the airport, but as of May 2020, these projects have been cancelled.