Launceston Airport (IATA: LST, ICAO: YMLT) is a regional airport on the outskirts of Launceston, Tasmania. The airport is located in the rural area of Western Junction 15 km (9.3 mi) from Launceston city centre. It is Tasmania’s fastest-growing airport, and the second busiest in the state, after Hobart International Airport.

Launceston Airport (IATA: LST, ICAO: YMLT) is a regional airport on the outskirts of Launceston, Tasmania. The airport is located in the rural area of Western Junction 15 km (9.3 mi) from Launceston city centre. It is Tasmania's fastest growing airport, and the second busiest in the state, after Hobart International Airport; it can also run as a curfew free airport. In the 2007/2008 financial year, the airport had a record 1.1 million passengers, up 10% on the previous year; 255,000 passengers passed through the airport in the three months to 30 September, up 7% on the previous year. 309,000 passengers passed through in January – March 2008, the highest ever number in a calendar quarter, up 11% on the previous year. It is currently Australia's 13th busiest airport, handling 1,126,572 passengers in the 2008–09 financial and 1,124,000 passengers in the 2009–10 financial year. The total number of passenger movements through Launceston Airport is projected to increase annually by 2.7 per cent during the forecast period to 2,000,000 in 2030–31. The expected growth rate reflects slower forecast longer term economic growth in Australia, the maturation of the impact of low-cost carriers on passenger movement growth and an expected increase in domestic airfares.

Exterior of airport terminal. View of entry to arrivals hall

After the formation of the Tasmanian Aero Club in 1927, the first air travel facility in Tasmania was built on the site. In July 1929 the Home Territories Department acquired land at the Western Junction, then also called Valley of Springs, for a £20,400 ($41,000) aerodrome. The Western Junction Aerodrome was officially opened in 1929 and opened for use in 1930. In February 1931, around 20,000 people crammed into Evandale Road to watch Colonel Brinsmead, Controller of Civil Aviation, officially open Western Junction as a government aerodrome. During 1932 small aircraft flew from Launceston to Flinders Island.

From August 1940 until late 1944, the airport used by the Royal Australian Air Force as a base for No. 7 Elementary Flying Training School. It was Tasmania's only RAAF Base. Two of the Bellman hangars from this period are still located at the airport, on the southern Freight and GA operations area.

In 1962 under the leadership of Tony John OAM, a plan for major redevelopment of the airport was approved. This included strengthening of all pavements, a runway extension, and a new terminal building. The airport was officially reopened that same year as Launceston Airport. In October 1982 the runway was further upgraded to Boeing 767 standard. In 1998, the airport was privatised, and is now owned jointly by Launceston City Council and Australia Pacific Airports Corporation Limited, which also owns Melbourne Airport. The collapse of Ansett Australia in 2001, the introduction of Virgin Blue (now Virgin Australia) and the Qantas subsidiary Jetstar Airways in 2001 and 2004; and the creation of the Australian low-cost airline market; have all contributed to a dramatic increase in aircraft movements at Launceston Airport. In 2007 the airport reached the milestone of one million passenger movements per year. Tiger Airways Australia also introduced services, and withdrew again in July 2010. 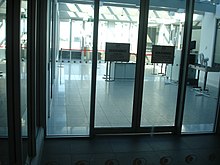 Tasmania has some of the world's strictest quarantine policies. Upon arrival, bags are scanned and a sniffer dog smells for any fruits, vegetables, flowers etc.

Launceston Airport terminal has recently undergone a A$20 million redevelopment, the largest expansion in its history. The project doubled the size of the terminal and was completed in November 2009. The airport currently has three retail and café outlets; Hudsons Coffee, Delaware North and News Travels, a News and Gift Shop, that all opened in July 2008.

As part of the expansion, two new gate lounges were installed (Gate Lounges 2 and 3), with the capability for two more gate lounges when required in future. The new gate lounges area is approximately 1,200 m2 (13,000 sq ft) at apron level. The gate lounges for departing passengers were constructed along with a 100 m2 (1,100 sq ft) extension of the landside lounge floor, bringing the landside lounge area to 800 m2 (8,600 sq ft). The new departure area has a single location for all airlines' check-in operations: QantasLink, Jetstar and Virgin Australia have a total of 12 check-in counters. A checked bag screening (CBS) facility is linked to these check-in counters, allowing all aircraft checked baggage to be screened as required by the Commonwealth government from 1 December 2008. A 500 m2 (5,400 sq ft) baggage arrivals hall was constructed, and two new baggage carousels were installed: the first one opened to the public on 18 March, with the second following in April. Previously passengers had to take their bags from the airline baggage equipment. A new multi-tenant car rental counter has been constructed next to the baggage arrivals area. There was a 1000m² expansion of the main landside passenger lounge, with views of the apron and runway.

The redeveloped terminal was officially opened on 12 March 2010 by the Premier of Tasmania, the Hon. David Bartlett.

Airlines of Tasmania provide twice weekly services to both Cape Barren Island and Hobart, in addition to light aircraft charter.

Primary access to Launceston Airport is via private vehicles. Launceston Airport has a Short Term and a Long Term Car Park, as well as an Overflow Carpark that can accommodate 150 Cars. Public transport is not provided between Launceston Airport and the City of launceston. Numerous taxi services are available as well as Airport Shuttle Buses that operate mainly from the City Centre to the airport but also connecting the Northwest Tasmanian towns of Devonport, Ulverstone and Burnie.

On 29 May 2003, Qantas Flight 1737 – en route from Melbourne Airport – was involved in an attempted hijacking shortly after takeoff. The would-be hijacker, a passenger named David Robinson, intended to fly the aircraft into the Walls of Jerusalem National Park located in central Tasmania. The flight attendants and passengers successfully subdued and restrained Robinson, and the aircraft returned to Melbourne, where it landed safely.